Dive In: The Blue Whale Project 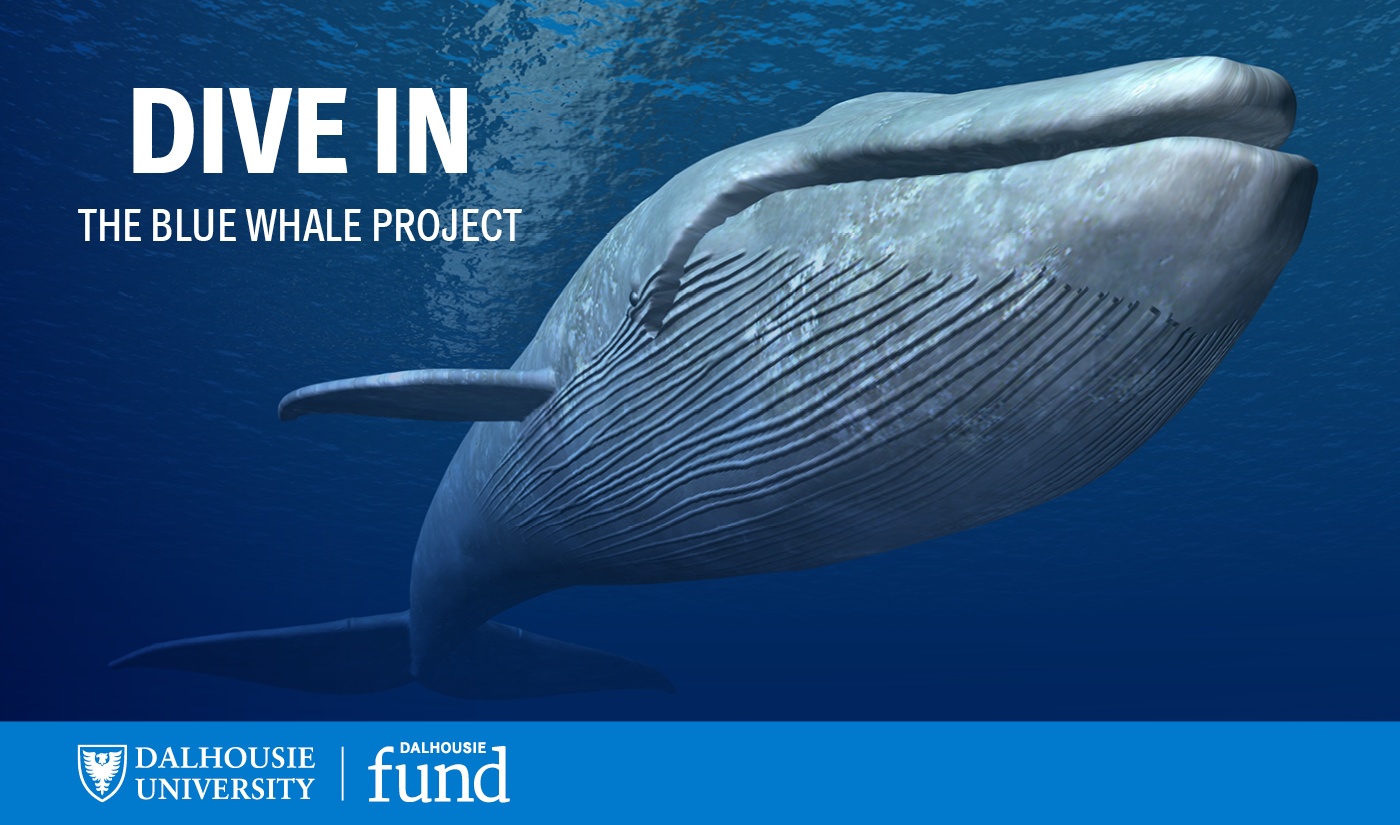 The world’s ocean covers 70% of the Earth’s surface and critically impacts our ability to live and breathe. It is rich in biological diversity, with ecosystems that are utterly dependent on each other. Today, populations of marine species face the threat of extinction caused by pollution, climate change and collisions with ocean vessels. The blue whale is one such animal affected. As the largest animal to have existed on Earth, blue whales play an important role in helping to stabilize the food chain while dispersing iron-rich nutrients for smaller sea life.

In 2017, an 18-metre blue whale was found dead on a coastline near Liverpool, Nova Scotia. From this discovery, Dive In: The Blue Whale Project was born. Since 2017, teams of students, faculty and community members have been restoring the bones, which will become a brand-new exhibit in the Atrium of Dalhousie’s Steele Ocean Sciences Building in 2021 to help inspire current and future generations to do what they can to save the species of our oceans. 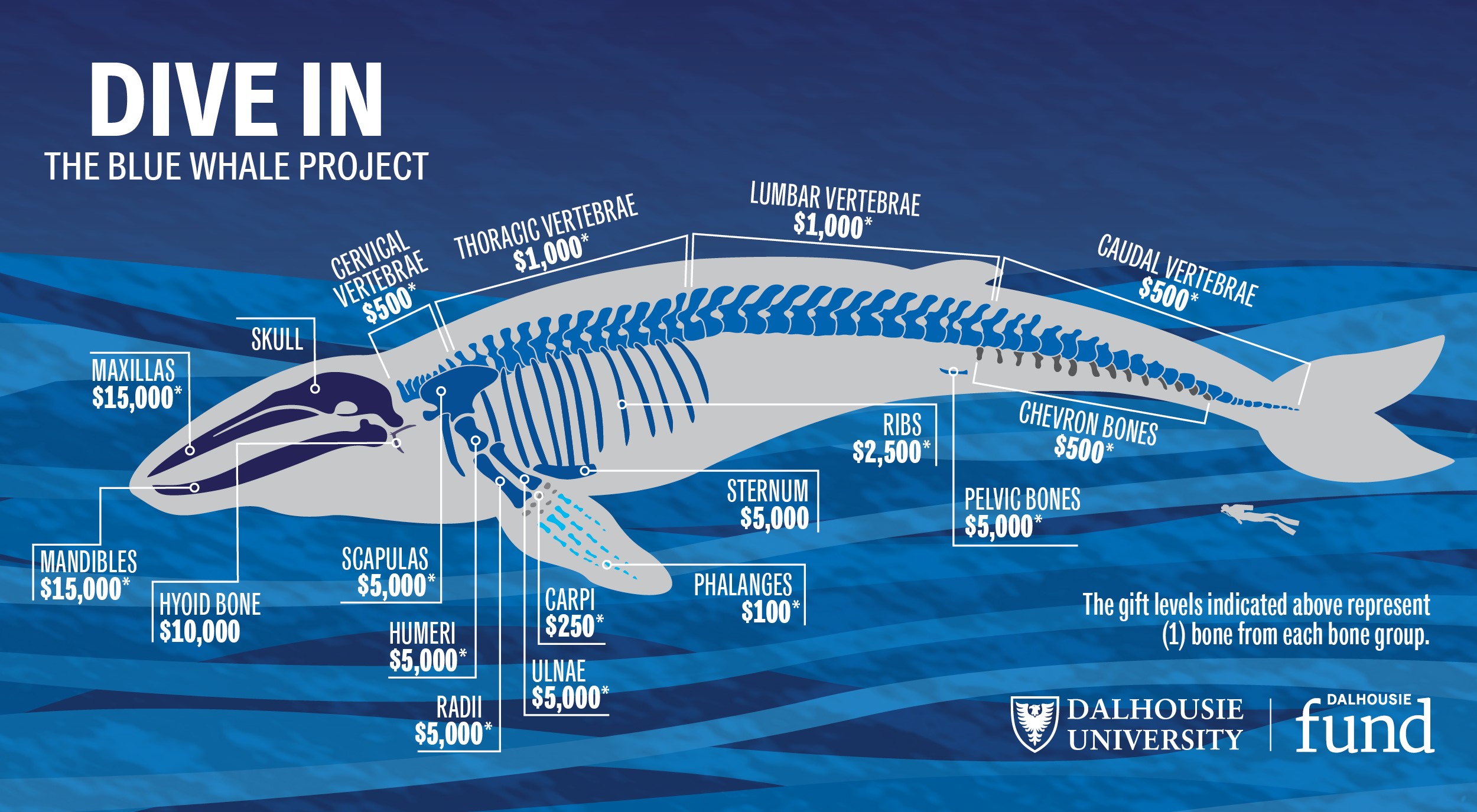 Dive In: The Blue Whale Project integrates skill sets that serve both science and arts students, the public, as well as the arts community in Nova Scotia. This compelling project will set a new industry standard in environmentally-sustainable decomposition. It will further students’ understanding of marine mammal science, while highlighting the need for improved conservation efforts, both for our ocean and the marine life that call it home. With a total project cost of $335,200.00, this fundraising campaign offers you a chance to name a bone of the blue whale, which range in price from $100.00 to $10,000.00. Funds raised will support the efforts, time and materials required to execute this project. Support Dive In: The Blue Whale Project today!

Our campaign has been highlighted in the news! Check out these recent articles:

We are so excited to launch Dive In: The Blue Whale Project to inspire future generations to save blue whales and our oceans! Join us and become an advocate for blue whales today!

Significant advances in knowledge happen occasionally through chance, unanticipated events: the recovery of a Copper Age "glacier mummy" or the discovery of a blue whale carcass on the beach. It is a credit to the researchers who recognize these opportunities.

What a great science project. Looking forward to seeing the final exhibit next year.

In honour of Danielle Moore, from the faculty and students in the Department of Oceanography.

Dal Biology of the 70's and 80's was the fuel for the curiosity that opened the world of science to me.

This will enable faculty and students to learn more about this large whale.

"As a teacher, I am always learning. The Blue Whale Project is a great example of this."

Donated on behalf of the Dalhousie BACK Program, a Dal Med team doing research on back pain. We support this initiative to raise awareness about the connection between environmental sustainability and human health. And yes, we named a BACK bone!

What an honour to support this amazing educational opportunity for the Dal community.

What a great way to give back to science, oceanography, and the study of our planet.

For the love of the ocean, to inspire future scientists.

As an alumni (PhD 9189) I recognize the great education Dalhousie provided me and generations of scientists who are making a difference for society and our environment.

I think that this is a great project that helps to educate all of us about the blue whale through the collection, restoration and display of this magnificent animal's skeleton at the ocean sciences building at Dal. I am glad to be able to help push the project forward in a small way.

What a wonderful initiative!

Hope for the future of my grandchildren

On behalf of Solutions for Kids in Pain

Brilliant, make no bones about that. Brilliant blue.

Best of success in this project!

I really love whales and I think it's really cool that I'll be able to see a real whale skeleton." - Jefferson, age 6

Yvonne and I are proud Alumni who met here at Dal and are thrilled to be a part of this project, even from afar. What a beautiful initiative!

Thrilled to support this project - such an exciting opportunity for Dal students.

What a wonderful initiative! Thank you for the opportunity to be a part of this project!

FUND THIS PROJECT
BY MONTHLY PAYMENT